Last week, I blogged about our impending camping trip to the mid north coast, on Friday afternoon we jumped in the car and drove up. The weather report still didn’t look great and we arrived at our destination tired and in the dark but happy. There were eight of us in total and it all started fairly uneventfully as we put out tents up in the dark. It was really cold and we didn’t have the chairs out yet but we had a beer or two in celebration of our efforts while we stamped our feet against the cold.

In the morning, we found some manky old chairs at one forgotten end of the campground, did a grocery run and got ourselves organised. The rain seemed to be brooding so we erected our tarp in front of The Designer and my tent, which was the biggest (and the cheapest – thank you Aldi).

After a big cook up for lunch we settled into camping life sitting in a circle, beer in hand. The rain started… then it stopped. We rejoiced and headed over to the beach. It was way too cold to swim but Tiona is so beautiful that you just don’t care.

Meanwhile the storm carried on brewing in the background.

The Designer and I rugged up at the beach and waiting for the rain. 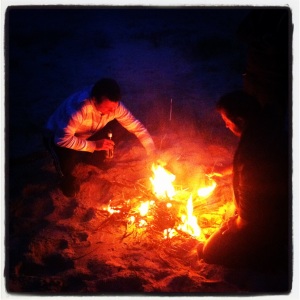 We even had a beach fire! The boys were very proud of themselves. We men, make fire and all that but Mother Nature decided to take over the situation almost as soon as we had it going and started crying all over the beach and our beautiful fire.

And this time there was no stopping it. It rained and rained and rained and we huddled together, eating cheezels and roasting marshmallows over the camp cooker in the good old modern way. The wind was wild, the rain was unrelenting and there was no escaping it. What do you do in these times of turmoil? Drink as much as you can, fight about drinking games, make a run for the campsite BBQ, realise you’ve forgotten the tongs and fight about who should going back for them. 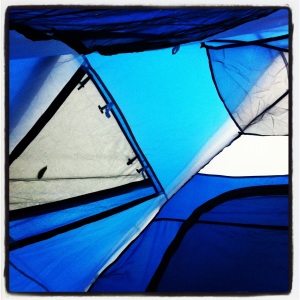 It rained through the night and when the thunder and lighting set in at around 3am it got really exciting from the inside of our humble abode. Our tent leaked a bit and while The Designer remained high and dry I woke to wet hair and a wet pillow and seven friends cracking lots of funnies about bedtime accidents.

But the pièce de résistance is yet to come. We straggled over to the camp BBQ in an array of ugg boots, matted hair, damp hoodies and prepared breakfast. Spirits were high but we did seem to be struggling. Then one of our group came rushing from the bathroom and called out to us, her eyes wide.

After a small amount of confusion it was determined that upon washing her hands our friend had taken a piece of toilet roll with which to blow her nose to which the huntsman was attached then THE HUNTSMAN WAS ON HER FACE THEN IT WAS ON HER HAND AND BIT HER. She screamed and another girl in the bathroom scoffed at her, picked the spider up and threw it outside. Apparently, our friend looked at her and could say only, “I’m Irish!”.

By now it had been raining for nearly 24 hours and we still had 24 hours left of our trip. Everything we owned was soaked and covered in mud and our Irish friend was, although holding up very well, keen to leave. We made the call and started to pack up the tents. We timed it perfectly so that as soon as we took the tent poles out sheets of rain fell down on us as we yelled at each other and shoved our wet dirty things into the car.

That was yesterday. Today I am home. I’ve had a big sleep and now I’m sitting on the couch, steaming coffee by my side. I guess we’ll have to put that camping trip down to ‘an experience!’.

Are you having a good long weekend?

One thought on “Weekend Wind Up – The Weekend That Wasn’t”

my day in pictures

search me… I dare you

what I write about