Another hectic weekend passed by at Casa Flowers, and this one was a little extended as on Monday we went to Eastern Creek for The Designer’s v8 drive experience (it was my Christmas present to him last year. Nothing like striking while the iron’s hot, wouldn’t you say?)

Anyway, all in all it was good. I attended a baby shower on Saturday afternoon and unfortunately lost my face to the meltage that came with 40 degree heat. Afterwards I met The Designer and two of my best mates, The Sparkling Podiatrist and The Singer slash Dancer and their beaus in the city for dinner and drinks.

One of the couples, there’s a story with these two – they arrived at their wedding reception via plane. That’s right, aeroplane. They were celebrating nine months of marriage so we quickly put away a bottle of champagne in celebration. 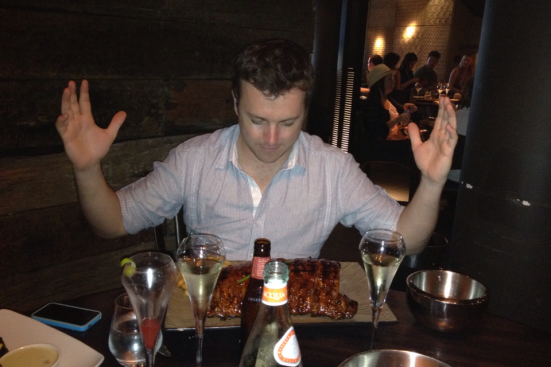 The Designer also enjoyed a full rack of ribs. That’s right, he finished them.

On Sunday we set up the blow up pool, left for us by The Designer’s brother when he moved to Singapore, in our backyard. I have to admit, I enjoyed this quite a bit.

Bring a cider into the mix and it was perfection itself!

my day in pictures

search me… I dare you

what I write about